skip to main | skip to sidebar

The Greatest Record Shop In The World : The Story Of Brad's Record Den Part 1! 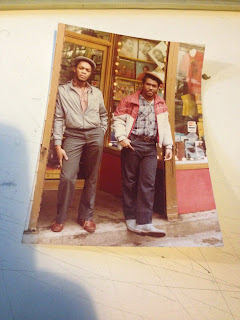 The Greatest Record Shop in the World: The Story Of Brad’s Record Den Part 1 (Buck The Humble One Interview)

Somewhere in the early 1970s, Brad Osbourne, recently arrived from Jamaica, opened a TV/electronics repair store in the Bronx at 3756 White Plains Road. Like his hero King Tubby, Brad parlayed his knowledge of electronics into a love for music. Soon, stacks of records were edging out the broken toasters and the repair shop became “Brad’s Record Den” arguably the most culturally important record store to ever exist in New York City. Brad was murdered in the 1980s and the shop was later taken over and eventually Brad’s back stock was bought by “Nu Look” records until it finally disappeared into the ether leaving behind a distinguished group of recordings under the Clocktower, Brad’s and Grand Groove imprints and a hefty cultural legacy. It has been very hard to find ANYTHING written about the shop so I have been contacting a number of people who used to work at Brad’s and interviewing them about their time at Brad’s, the man himself, the neighborhood and the deep influence the store had in the creation of hip hop. This first interview is with one of my longtime friends and musical mentors Roy Buckley aka Buck The Humble One aka Papa Iron who manned the turntables at Moodies records for years and years and worked at Brad’s from 1980 until Brad was killed.

Me: What Year did you star working at Brads?

Buck: 1980. I always hung around the record store after school and I guess Brad noticed that I loved the music. He started to trust me and and took me into the back and into the basement. I just kept going back after school. First he made me do chores, straightening records, cleaning the floors – them kind of thing. In those days, you started at the bottom and gradually worked up to turntable duty. There were 3 turntables – one in front, one in a middle and one in back – you graduated from one turntable to another. The back was where the soul and hip hop played and that is where I started. Back then, all the rappers and DJs would come shop there. All them guys like Kool Herc, Afrika Bambata and Grand Master Flash had been shopping at Brad’s for years and Brad’s was where they found a lot of the break beat records that they ended up making famous. I knew all the souls and discos and they would come begging me for exclusives. I remember bringing them the Pointer Sisters “Yes We Can Can” which became one of the biggest records that they would all fight over. In fact, it was by playing those breaks in the back that Brad and Glen Adams first heard T-Ski Love who used to rap over the records that I played. Brad and Glen took him right from the store to the studio and cut “Catch the Beat” (a big early record from 1981 on Brad’s and Glen Adam’s Grand Groove Records).

Me: Where was the Reggae Section located?

Buck: Middle of store was reggae. Front was calypso. You couldn’t walk inside that store on the weekends – line outside! Brad always locked the door at 9 on the dot no matter how busy it was.

Me: In those days not a lot of reggae was being pressed in the States and there weren’t so many distributors. How was Brad getting the records to supply demand?

Buck: Brad always got reggae from Jamaica. Pure export thing. Lee Perry was his idol and he was very, very close with Bunny Lee and King Tubby, Gussie Clarke all them type a guys would get Brad exclusive things. But Brad was smart, if a tune was big like John Holt “Up Park Camp” Brad would buy up every single copy that the man have so every store in New York would have to come to Brad if they want to sell it.

Me: What other stores were around at the time?

Buck: The only other Bronx store was Andy’s Records. But there were others in Brooklyn, Queens, Harlem. And later everyone that worked at Brad’s opened their own shops -- Tad’s, Moodies, alla dem.

Me: Did Wackies have a store?

Buck: No, Wackies had a sound system, though – a big sound system! They had studio too and sold tune to Brad.

Me: What other sound systems do you remember from then?

Buck: Well, Brad’s brother Michael had a sound – don’t remember the name; Son’s Junior, Downbeat, Sir Tommy, but all the sounds from everywhere came to Brad’s. The majority of artists that would come to New York on tour always come by the store. Sly Dunbar used to always buy jazz. Winston Riley would come thru; Even the Rolling Stones came to Brad’s! Keith Richards, that man loved the Itals “Ina Dis ya Time” and they bought every copy we had in the store.

Buck: Of course! Brad, he had special customer -- Downbeat, Son’s Junior they always had some pre-release or some package waiting for them. Brad also kept the hardcore roots for special customers because they were not big sellers. People at that time were buying the hits and Channel One, music kept coming out one after another.

Buck: Man. Brad was one of the greatest people ever. The day after he died a part of me died too. You see, he took me on like a son. He was the only man my mom would trust me with. He was responsible for me and he took that serious. He saw talent in people and encouraged that, encouraged love for the music. On school nights he would bring me to studio. One night I remember Dennis Brown voicing the song “Home Sweet Home” and it was amazing, after loving his music, to be in studio with him. I got to see the genius of Dennis, he just bun spliff and did the song in one take. Then Brad said “Bucky come touch this!” because Brad used to come round and hear me chat on the sound Round Town. And Dennis was so impressed.

Me: Brad put out so many great an innovative Roots and Dub LPs as well as singles. Did people buy them in the shop?

Buck: Well Brad -- He has a formula.: Giving songs weird titles, changing the labels and all that. He would buy the songs from the producer and they would send the tape. And then Brad would go to Wackies studio and do overdubs and add harmonies and such. Especially flutes! Brad would do the dubs himself. Always would add something to the dubs. But people at the shop never buy those records. People only wanted Jamaican press and would ignore Brad’s own pressing. There were a lot of great NY artists but no one would pay attention to them. Brad did well exporting his own records though.

Me: What did you think was the most special aspect of Brad’s?

Buck: Well…Let me think bout that…You see a record store stands for access to music and Brad’s interest in music was wide and he catered to every customer base. It was a kind of college for music – everyone who passed thru the shop or who worked there learned things. Really, I would say that Brad’s was the store that introduced reggae to the hip hop customers for the first time and they helped to introduce Hip hop to the Jamaicans. It was an inclusive store and made everyone feel good, feel like they belonged. The record shop was a place to be. It kind of functioned as a community center for Jamaicans that had just started to move to the Bronx. It grew from the 70s and blossomed in the 80s. Everything was just so good then. But when the music changed, the business changed.

Me: And then Brad Died.

Buck: Yeah. I still can’t talk about that. It was the worst day.
投稿者 Deadly Dragon Sound 時刻: 13:18 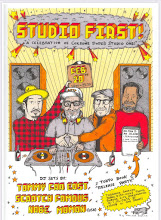